THE VYLLIES are three independent women from the french speaking part of Switzerland, who attracted a great deal of public attention in the 1980s with their unique sound and dramatic stage performances.

The band’s name is derived from 'Víly' – female nature spirits in Slavic mythology. According to Slavic folk tales they were young women who died before marriage. Driven by lust for life, they would leave their graves at night, to dance at crossroads. Should they capture a living man, they would wildly dance with him until he dropped dead. The elf-like creatures also appear in a text by Heinrich Heine, a text that inspired the ballet 'Giselle ou les Willis'.

The history of THE VYLLIES begins in 1983, when ILONA PRISM (vocals, bass), URSULA NUN (keyboards) and MANUE MOAN (vocals, percussion) first met at the University of Lausanne. They felt concerned about the role of women in the music business and thus decided to write their own songs. After some promising concerts they dropped out of university the very same year in order to completely devote themselves to music.

Through their acquaintance with the members of the Greek cult band YELL-O-YELL the fate of THE VYLLIES was going to take a new turn. In December 1983, as the Greek musicians were mixing their new LP in a studio in Athens, they offered the female artists the opportunity to record their own material. What then came out within a few hours was so convincing that the Greek producer spontaneously published the five experimental tracks on a mini-LP. Only a few copies found their way to Switzerland. Enough, however, for the band to be discovered and played by various radio stations.

More gigs followed, some of them as support to bands like MINIMAL COMPACT, SEX GANG CHILDREN and THE GUN CLUB. By virtue of a strong stage presence as well as atmospheric synth songs, the three women used to mesmerize their audience.

At that point Disctrade, a label from Zurich, got aware of the band’s unusual music and proposed them a recording contract. Thus the young artists were enabled to record their newly matured ideas in the fall of 1984 at a studio near Zurich. For the first time they introduced classical instruments such as cello, piano and violin into their music. In conjunction with synthesizers and the typical VYLLIES vocals the sound developed into a hypnotic whole, which was released on the second mini-album Velvet Tales in January 1985. The record triggered a strong positive response.
The song 'Ahia' turned out to be the big favourite, not only for Swiss radio stations. The English TV channel 'Music Box' produced a video clip of the song in the Zurich Opera House and broadcast it throughout Europe. Following its success 'Velvet Tales' was released in the neighbouring countries as well as in England.
The mini-LP found its way into the local music press even in the United States, who were fascinated by the exotic ladies beyond the valley and the shadow of Heidi. In the spring of 1985 other important performances took place, such as for instance at the Montreux Jazz Festival on the same evening as NINA HAGEN and WORKING WEEK.

Towards the end of 1985, the three musicians went back to the studio. Their musical evolution on the resulting LP Lilith was obvious. Each song diffused its own fascination – ten completely different mood landscapes that unmistakably expressed THE VYLLIES very own style. 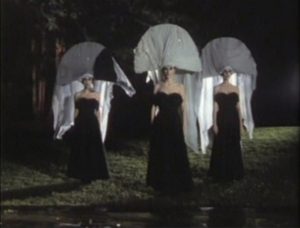 On the occasion of their second video clip, realized by film director Urs Egger, the track 'Whispers In The Shadow' got re-recorded. The outcome was a short film of stunning beauty featuring a mysterious, magical but also sad love story. The video was broadcast for the first time on 16th October 1986 on Swiss television, but soon found its way to foreign TV stations. As a result, the British label 'Fun After All' licensed the records of the band for the United Kingdom, France, the United States and other countries.

In 1987 THE VYLLIES released another album called Sacred Games with the single release 'Now We Fall'. In this more melodic production, the musicians created once more wonderful dreamscapes that captured a wider audience. Subsequently 'Sacred Games' was released on a CD, with six additional tracks from the earlier records 'Ahia' and 'Whispers In The Shadow'. In the spring 1987, after several major concerts in Switzerland, the band embarked on a several-month European tour. Despite their success, the three women went separate ways from mid-1988 on.

The double CD THE VYLLIES 1983-1988 REMASTERED provides, with 29 digitally remastered tracks, a deep insight into the musical work of THE VYLLIES and includes a comprehensive booklet.