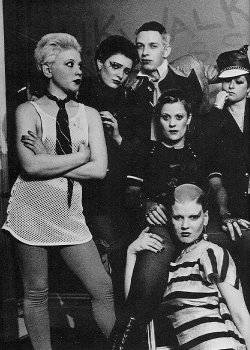 These visually articulate suburban teenagers, some still at school others unemployed, were the first punk fans, liberated by the movement’s do-it-yourself ethos.

In their dress they were ‘work of art – originals’. They wanted to be different and incorporating the clothes of Vivienne Westwood into their look and inspired with their own ideas the design of the SEX-clothing. The Bromley Contingent shared a highly developed knowledge of pop culture and style references. 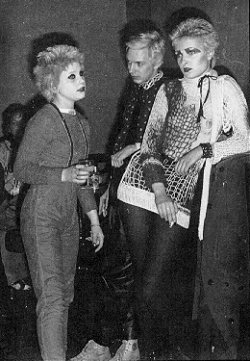 ‘Bromley is perfect’, said Simon Barker. ‘It’s a twenty-minute train ride to London, so even when I think I was thirteen it was quite easy to get a day return to London. You’d walk down the Kings Road and see it, then come back to Bromley. Living in suburbs gives you a bigger and better perspective on things.’

Simon Barker and Steve Bailey went to school together, the Bromley Technical High. Billy Broad went to another school in Bromley. They came together because of their equal interest for David Bowie, Roxy Music and Clockwork Orange. But once their heroes became more commercial they no longer admire them.

The Sex Pistols’ performance on 9 December plugged them together. ‘It was Saturday night and there was nothing to do’, says Barker. ‘We went to Ravensbourne College: there was a band called Fogg, but we didn’t go to see them. I got there and saw Malcolm: I’d seen him in the shop and I thought, “Wow, what’s he doing here”. Then the Sex Pistols came on and I was the only person clapping. All the students were going mad, shouting and crap. The group were awful but it was visually really brilliant.’ 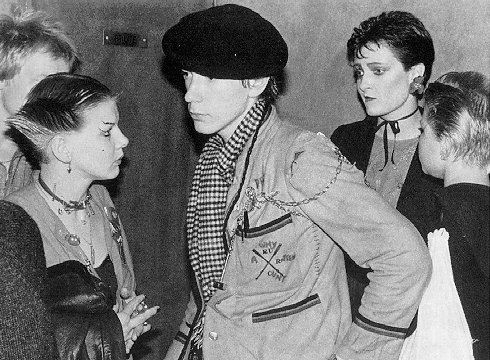 ‘I always gravitated to the city’, says Siouxsie, ‘I hated suburbia. … I’d been to the shop before I knew about the group: I’d bought some fishnet tights with gold and black tassels on them. I remember Vivienne, she looked gorgeous: she had blonde hair with purple pink lips. I was really attracted. Simon told me about the Pistols: the first time I saw them, there was just a few students wondering about and everyone kept their distance. It wasn’t aggressive. They just played their music.’

Much of the time spent the Bromley Contingent with Vivienne Westwood and Malcolm McLaren on the Kings Road, or following the Sex Pistols from venue to venue. The appereance of those oddly dressed teenagers at every concert gave the Sex Pistols a boost.

Some of them – Siouxsie, Simone, Steve and Simon – escorted the Pistols also to the famous-notorious Bill Grundy TV show.