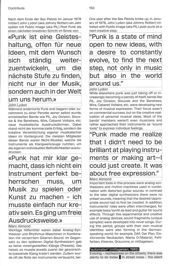 One year after the Sex Pistols broke up, in January of 1978, John Lydon (aka Johnny Rotten) initiated with ‘Public Image’ (aka PiL) post-punk as a next creative step, in the sense of:
«Punk is a state of mind open to new ideas, with a desire to constantly evolve, to find the next step, not only in music but also in the world around us.» John Lydon

While elsewhere punk was just taking off or increasingly becoming a parody of itself, bands like PiL, Joy Division, Siouxsie and the Banshees, Wire, Cabaret Voltaire, etc. were developing new forms of musical expression. Their focus wasn’t on commercial success, but on the creative realization of personal musical ideas. Most of the bands’ members weren’t even musicians, approaching their instruments as ‘sound tools’ to express individual feelings.

«Punk made me realise that I didn’t need to be brilliant at playing instruments or making art – I could just create. It was about free expression.» Marc Almond

Important tools in this process were analog synthesizers and rhythm machines used in combination with distorted guitar sounds. In contrast to the later digital synthesizers there were no preset sounds, meaning that the desired/appropriate sound had to first be created. In addition, instruments’ roles were often interchanged, for example bass/synth as lead and guitar for sound effects. Through this experimental and creative use of analog devices, sound fragments (unique samples) were developed into novel songs.

During this period groups with their own musical identities were also forming in the Germanspeaking world; for example, DAF, Der Plan, Einstürzende Neubauten, Mania D / Malaria!, Fehlfarben, Kleenex, Grauzone, mittageisen.

The end of the 1970s was less colorful than today, requiring a closer look at the hues and grey tones between. The world, and especially Berlin, was divided between the then world powers of the United States, Great Britain, and France, as well as the USSR. While the Soviet Union and the rest of Eastern Europe struggled with perestroika and glasnost, and in Northern Ireland English colonialists suppressed the Irish population by force of arms, right-wing conservative politicians like Reagan, Thatcher, and Kohl took over the reins of power. After an intermezzo of the Potemkinesque ‘new middle’ at the turn of the millennium, behind whose ‘common wealth’ facades neo-liberal interests were served, the failure of established politicians was being exploited by egocentric autocrats to install nationalist, authoritarian systems.

The world has changed considerably in recent decades, and in a direction that has been a dead end since 2008 at the latest. A rapid change in work and leisure has simultaneously taken place through the digitization of products and processes in which every object/subject is part of a commercial ‘internet of things’. Analogous to Huxley’s Brave New World, the material narcotization as well as debilitation through old and new media forces people to run even faster on the hamster wheel, interpreted as a career ladder through the narrow tunnel-view of the ambitious.
What needed to be taken into consideration was not only how many reproducible activities could increasingly be carried out by machines, but also how resulting value could be used for non-monetarily compensated activities for the benefit of the common good.

«Now, here, you see, it takes all the running you can do, to keep in the same place. If you want to get somewhere else, you must run at least twice as fast as that!» Lewis Caroll, Through the Looking-Glass (1871)

The end of the 70s also saw a segment of its youth channeling their anger into creative energy, rebelling through the production of their own music, fanzines, clothes, etc. — not least in order to prevent an Orwellian 1984. As Edward Snowden has since shown, state security services like the NSA have introduced technical systems to monitor and control targeted groups.
Even if the assessment of the current situation and its resulting perspectives seem somewhat dismal and the punk slogan ‘No Future!’ feels current, it helps to remember that new technologies also bring new creative potential for alternative activities.

«‹No Future› isn’t at all a contradiction to ‘do it yourself’. Because only those who do nothing have no future.» John Lydon

Around one-hundred years after the Cabaret Voltaire (Dada), forty years after punk, and not least against the backdrop of today’s societal developments, the time is ripe for a break into a socio-cultural future.
Punk’s effect could unfold because of its connection to real life situations. What role music will play in the next socio-cultural rebellion remains to be seen. What’s clear is that there will be a soundtrack…