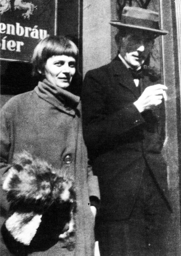 In 1915 – at the beginning of World War I – Hugo Ball (writer and theatre director) came with his female partner Emmy Hennings (dancer and chanteuse) from Munich to Zurich.

Hugo Ball:
I didn’t like the death-hussars,
And not the howitzers with girls’ names,
And at the end when the great days came,
I went discreetly away. 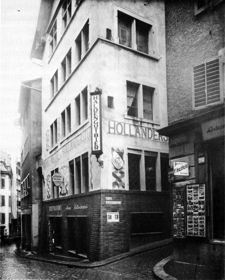 On Saturday February 3, 1916 was the inauguration of the Cabaret or 'artist-tavern Voltaire' located at Spiegelgasse 1 in Zurich.

Hugo Ball made an agreement with the owner of the tavern 'Meierei' to use the backroom for a literary cabaret and to increase the sale of beer, sausages and sandwiches. 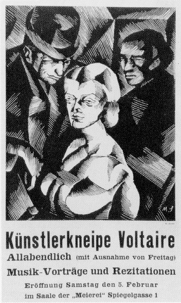 Despite of World War I, the atmosphere in Zurich was very liberal. In the same narrow alley, where the Cabarat Voltaire played, lived in the Spiegelgasse 14 a certain Mister Uljanow aka Lenin.
The authorities were much more suspicious about the chaotic dadaists than of the quiet, studied Russians …

The only edition of the magazine 'Cabaret Voltaire' was published on June 15, 1916.

It was initiated by Hugo Ball and contained, amongst contributions from Kandinsky, Arp, Modigliani and others, the first print of the word Dada!

In addition to the literary character of Cabaret Voltaire the Zurich Dadaism attented in a second phase to the pictorial art.
Hugo Ball "18.3.1917: Together with Tzara I took over the rooms of gallery Corray and yesterday we opened the gallery DADA …"
At the Bahnhofstrasse 19, they exhibited works from Kandinsky, Klee, Arp, de Chirico, Feininger, Ernst, Janco, Modigliani, Macke, Kokoschka and others. 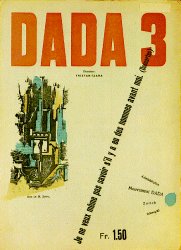 Hugo Ball "18.4.1917: Tzara insisted on the magazine. My suggestion to name it 'Dada' was accepted."
From July 1917 to May 1919 four magazines were published. The third number contained, in addition to contributions by members of the Berlin 'Club Dada', articles by Francis Picabia.
On the publication 'DADA 4-5' worked further members of the Paris group.

The 8th 'Dada-Soirée' was at the 'Kaufleuten Saal' on April 9, 1919. During a reading of Walter Serner the audience began with interjections and finally some of them attacked the stage. The whole auditorium was in commotion and Dada-Zurich ended in tumult and chaos as it began.