Three individuals – Siouxsie Sioux, Steve Havoc (aka Steve Severin), Billy Broad (aka Billy Idol) – had been following the Sex Pistols as the nucleus of the Bromley Contingent, since they had witnessed them for the first time the previous January. They became contact to the bands manager Malcolm McLaren and finally approached him to appear at the planned ‘100 Club Punk Festival’. 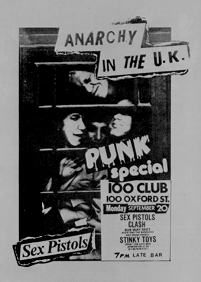 Poster for the Punk-Rock Festival at the ‘100 Club’ Malcolm agreed and the next few days were spent deciding on a suitable name to perform as. It was the horror movie ‘Cry of the Banshee’ which inspired Steve to the suggestion Susy and the Banshees, which after Siouxsie has altered the spelling of Susy to Suzie, was accepted. Now, decisions had to made as to what roles they wouldindividually take in the band. One thing was certain whatever the outcome, it would be a pretty unique performance, as only Billy had any previous musical knowledge (having played guitar for three or four years) and they hadn’t got a drummer!

With the date of the gig drawing nearer, a rapid decision had to be made as to what the set would consist of. Several ideas emerged, the basis of the idea being that Billy would show Steve the rudimentary bass notes and they would spent the allocated twenty minute set in the total destruction of one of their most hated songs.

The basic preparation and plans suffered a set-back at this point, when Billy phoned Siouxsie and Steve to inform them that he had decided to take the advice of Tony James (the bass player of Billy’s band Chelsea), to withdraw from taking part in the planned event, suggesting that his participation would only prove damaging to the reputation of their group! An alternative measure, Billy suggested that the Banshees should approach Marco Pirroni to replace him as guitarist, as he had just left Chelsea. So it was that Marco joined the ranks, although it was now two days prior to the festival and the drummers seat was still vacant. It followed that during a meeting with Malcolm McLaren at ‘Louise Club’ in Soho, upon relating the drummerless situation to him, he promptly asked Sid Vicious to sit in with the Banshees. 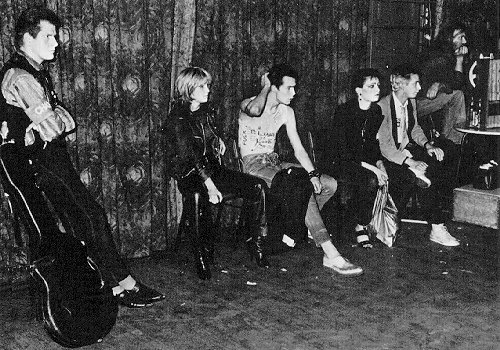